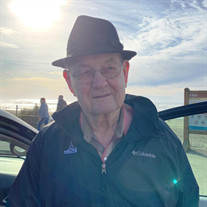 Willis Carl Eichstadt, born September 23, 1933, grew up amongst many brothers and sisters in Wolsey, South Dakota on the farm of his parents, Herman and Martha. After graduating high school, he spent four years in the Air Force. His final duty upon discharge was aircraft mechanic. He married a woman named Geraldine and moved to Wolsey to try out the farm life again. However, fixing equipment was now in his blood and, within six months, they decided to relocate to Seattle so he could pursue a job at Boeing. Along the way, God had other plans, it seemed, and they got snowed in by a blizzard at Rapid City, South Dakota; they ended up remaining there for 9 years. During this time when work was difficult to find nearby, Willis had to travel, taking jobs hundreds of miles from home. This put a great strain on the entire family, with ecstatic reunions at his homecomings and wrenching, tear-filled goodbyes when he would leave to return to work. After nine years, more trials awaited his family at this time as he and Geraldine got divorced. His ex-wife remarried and had to relocate with their children to England as her new husband was in the Air Force. The five-year split was a terrible time for both Willis and the children. They reunited in 1973 upon their return state-side. Around this time Willis went to work for the Alyeksa Pipeline, where he worked hard, building his savings with visions of owning his own business which eventually came to fruition when he created Eichstadt Engine Service. He did so much more than just engines, refurbishing and building custom work trucks and other heavy equipment. Finally, having had enough of the brutal winters of Alaska, Willis moved to Monmouth, Oregon in 2001, having built his dream shop and home on a small hobby farm there just prior to moving down. During his visits to Monmouth to see his children, who had relocated thereafter the Air Force tour of duty, Willis fell in love with the Williamette Valley. Comfortable at last in a beautiful land and finding friends that he truly embraced, he continued his work and gathered many friends, both human and animal! He could never turn away an animal in need of a home. His small farm became a haven for all creatures great and small, from spectacular horses and llamas to the tiniest of kittens. With the help of his assistant and good friend and caretaker, Monica Zane, and their veterinarian, many of Willis’ buddies lived long healthy lives with him. At one point, over 35 “kittens” as he liked to call them all, were counted! Willis liked to say that you could always count on their honesty…you always knew where you stood with a kitten, unlike most human folks. Willis was able to spend his final years where he was most comfortable, on the farm with his friends nearby and his kittens close. To illustrate just how dearly he loved them, he told daughter Sherrie that if the kittens took over his bed and there was no room for him, he would head to a spare bedroom to avoid disturbing their sleep. Willis also spent his last day doing his favorite things, eating breakfast at Elmer’s and working on a generator. Willis is survived by his daughter, Sherrie Rathje and son-in-law Paul Rathje. In lieu of flowers, donations may be made to the Humane Society. Willis was the sole survivor of his brothers and sisters upon his passing. Willis will be interred with military honors on Wednesday, July 7, 2 pm at Willamette National Cemetery, Portland, Oregon. Farnstrom Mortuary is caring for the family.

Willis Carl Eichstadt, born September 23, 1933, grew up amongst many brothers and sisters in Wolsey, South Dakota on the farm of his parents, Herman and Martha. After graduating high school, he spent four years in the Air Force. His final... View Obituary & Service Information

The family of Willis Carl Eichstadt created this Life Tributes page to make it easy to share your memories.

Send flowers to the Eichstadt family.