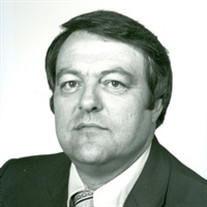 Wayne left us on December 29, 2017 due to complications and severity of a stroke. Marcia and Kyle were with him at that time. All his family had been near during his serious illness 12 days prior. Wayne was born November 11, 1939 in Salem, Oregon to Herschel and Jenetta Bond of Monmouth. The family was living at Otis, Oregon, near the coast at that time but moved to the long held family farm out of Monmouth just a few years later. Wayne attended Monmouth schools and Central High School graduating in 1957. He then attended OCE (Western). All through school Wayne was active in sports, especially football and track. He excelled in track earning several awards. His high school football team was a winning team. He was proud of that. He even played football at OCE but after they carried him off the field two different times that ended that. In December of 1958 Wayne married Marcia Stewart. Wayne and Marcia were high school sweethearts. They married young and supported one another in all ways from that day on. They bought their first home just outside Monmouth. Soon after, their first child, Darren, was born. Like most men, Wayne was proud as punch he had his boy. However, 2 years later when a little girl, Lisa, came along and resembled him, he was very proud once again. Wayne was a good father. While his job required him to be gone a lot he always was present for the children and their activities and events. There were times when he drove a long ways and into the night to get home to support them. Wayne worked for Borden Co., West Coast Resins Division. He traveled a lot, mostly the Western states but always made it home at least for weekends. After a few years with Borden Wayne took a job with Georgia Pacific's Resin Division, doing the same type of work. The west coast division was just starting up and it seemed like a good opportunity. Wayne became the West Coast Sales Manager after a few years and continued his career with Georgia Pacific until his retirement in 1996. Wayne had been a member of the Oregon National Guard but never had to serve under any war conditions. He called himself a weekend warrior. Wayne loved all outdoor sports. Always a football fan, but mostly sports that put him into the forest or countryside. He was an avid hunter. Fall hunting season was his favorite time of the year. He loved the people, the camping, the actual hunt and teaching what he knew to others. Wayne won a Boone and Crockett North American Big Game Competition award with a Columbian Blacktail Deer kill in 1967. In May of 1968, he and Marcia were invited to Pittsburgh for the presentation of the award at Carnegie Museum. It was a very formal and elaborate event. When he went up for his second place award, both he and Marcia were very proud. After retiring, the couple went to Europe, seeing several countries, and also were able to enjoy a trip to New Zealand and Australia. While in Australia their first grandchild, Kyle, was born. Later, back at home, five other grandchildren came along. Wayne loved them as he had loved his own children, with all he had. He was a devoted family man. He was outspoken with his love and proud of each and every family member. Sometimes those family members continued on in friendships that were everlasting as well. Wayne leaves his wife, Marcia Bond, son and daughter-in-law, Darren and Sheri Bond, six grandchildren, Kyle Stewart, Sarah (and Eric) Enders, Eli Bond, Wyatt, Reilly and Molly Drew, and two great-grandchildren, Malachi and Olivia. All live in Oregon, and most in Salem. He also leaves behind one sister, Alice Bond Seaman of Monmouth along with several extended family members. Daughter, Lisa Stewart, preceded him in death October 2008. He will always be loved.

Wayne left us on December 29, 2017 due to complications and severity of a stroke. Marcia and Kyle were with him at that time. All his family had been near during his serious illness 12 days prior. Wayne was born November 11, 1939 in Salem,... View Obituary & Service Information

The family of Wayne Herschel Bond created this Life Tributes page to make it easy to share your memories.

Wayne left us on December 29, 2017 due to complications and severity...

Send flowers to the Bond family.