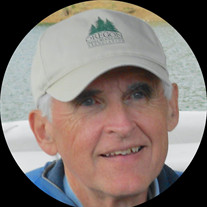 Thaddeus “Ted” John Niemiec, a True Pioneer August 18, 1941 - January 11, 2022 Thaddeus “Ted” John Niemiec, 80, passed away peacefully in Salem on January 11, 2022 of natural causes while surrounded by his family. Ted was born and grew up in Chicago with his sister Mary Ann (Dranchak) and attended St. Ann School and St. Rita High School. He accompanied his father, a trucking company owner and long haul driver, from coast to coast which inspired his love for the open road and exploring new locations. Days after graduating from high school in 1959, Ted braved the primitive roads and vast distance to Fairbanks, Alaska in an old panel truck of dubious reliability. In Alaska he saw endless potential and set down roots as a pioneer in the very year Alaska attained statehood. He returned to Chicago in 1961 to marry his childhood sweetheart, Christine Ann Brendal. Together, they returned to Fairbanks where they built their home and raised 5 children while Ted worked and attended the University of Alaska School of Engineering. Ted’s career spanned over four decades with the Alaska State Highway Department and Alaska Department of Transportation and Public Facilities where he was a Survey Party Chief and Project Engineer. He engineered hundreds of miles of roadway, as well as bridges and airports, to connect Alaska and Alaskans, and to further open Alaska for commerce and as a popular tourist destination. Summers became an adventure in which Ted and Christine would pack the family, a trailer and tents to spend months out on projects near Central, Delta, and the Canadian Border. Winter adventures would find Ted driving the family with that same trailer in tow as far south as Mexico City and east to Bangor, Maine. Ted and Christine moved the family to rural Monmouth, Oregon in 1975 where Ted professionally-led crews for a private surveying company. His weekends and evenings were never idle as he drove his passion for forestry in developing the Niemiec Family Tree Farm, and participated as a member of the Oregon Small Woodland Association and the American Forestry Association. Ted resumed engineering projects for the State of Alaska until his retirement in 2001. In his retirement, he continued to cultivate the family forest into a Certified Small Woodland. This remains as a unique living legacy, including its many natural creatures which Ted loved and deeply appreciated. Ted was preceded in death by his parents Andrew and Anna Niemiec, and by his beloved daughter Marie, and he joins them now in heaven for eternity. Ted is survived by his wife of 61 years Christine, sister Mary Ann Dranchak, children Andrew Niemiec (Sharon Walsh), John Niemiec, Cathy Hillenbrand (Mark), Renee Bear (Steve). He also leaves his grandchildren Megan Bear (Logan McLain), Chase, Amanda, Allie, and Nate Bear; Brian and Dani Hillenbrand; and Molly and Emily Niemiec, as well as his nieces and nephews David and Sue Dranchak (Andy Nielsen), and Brian Brendal (Christie) and Denise Boksa (John). A private celebration of Ted's life was held on Thursday January 20, 2022. Donations in his name may be made to further Alzheimer's research at alz.org.

The family of Thaddeus "Ted" John Niemiec created this Life Tributes page to make it easy to share your memories.

Send flowers to the Niemiec family.