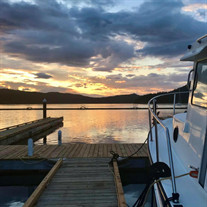 The family of Ronald Edward DeVolder created this Life Tributes page to make it easy to share your memories.

Send comfort and support when it's needed most.