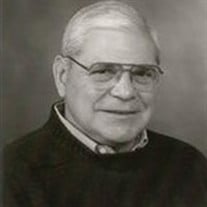 Obituary, Dr. Richard "Dick" Earl Walker April 14, 1935 ~ May 31, 2008 Dr. Richard "Dick" Earl Walker of Lake Oswego passed away in Terrebonne, Oregon at his second home away from home at the age of 73. Dick was born in Shelbyville, Illinois to Wallace Lane and Gertrude Arlene Bube Walker. He graduated from Shelbyville High School in 1953. After high school he attended University of Illinois. He Graduated from Millikin University in Decatur, Illinois in 1958. Dick was a lifetime member of Sigma Alpha Epsilon Fraternity and Phi Beta Kappa. Dick was also a member of the Benevolent and Protective Order of ELKS, joining the order in January 1963. Dick served as Exalted Ruler of the Independence Lodge #1950 from 1976-1977, becoming a life member in 1980. he served as the Oregon State Association Elks President from 1991 and 1992. He helped with the Casey Eye Institute and Meadowood Springs with his involvement with the Elks and served Chairman of the Children Eye Clinic since 2005, Chairman of the physical handicap committee 1979-1982 and Meadowood Springs Committee 1982-1985. Dick taught Industrial Arts at Lakeview High School from 1958 to 1961. He received a Masters of Education from the University of Illinois in 1962. Then he became professor at Northern Illinois University from 1962-1964. Dick received a Doctorate of Education from the University of Northern Colorado in 1967. He was a professor at St. Cloud State College from 1967 to 1972, then Western Oregon State College now Western Oregon University from 1972 until retiring in 1996 as Chair of the Special Education Division. He was married to Beverly Ann Born on February 14, 1959. They later separated, but maintained a good friendship. After his retirement, Dick enjoyed traveling. He visited Europe, Africa, Central America, Australia, Hawaii, and Fiji. He also enjoyed cooking, dining out, and spending time at his second home in Terrebonne, Oregon. Perhaps his greatest joy in his later years was spending time with his grandkids. People who knew him would likely describe him as compassionate and civic-minded. Survivors include his daughter and son-in-law Teri Walker and Bret Smith, Grandchildren; Kelby Smith, Mackenzie Smith, Kody Smith, Claire Smith, Partner; Marc Walters and Sister Judy Brewer. Dick was preceded in death by his daughter Jodi Walker, Father; Wallace Lane Walker and mother; Gertrude Walker. Funeral Services will be held 1:00 p.m. Sunday June 8, 2008 at Howe & Yockey Funeral Home in Shelbyville, Illinois. Interment will follow chapel service at Glenwood Cemetery in Shelbyville. Celebration of Life service will be held 11:00 a.m. Tuesday June 24, 2008 at Monmouth Christian Church 959 W. Church St. Monmouth, Oregon 97361. Reception will follow at the church fellowship hall. Contributions can be made to the ELKS Children's Eye Clinic c/o Oregon State Elks Association PO Box 189 Salem, Oregon 97308 or the Western Oregon University Foundation c/o Dr. Richard Walker Memorial 345 N. Monmouth Ave. Monmouth, Oregon 97361. Arrangements Entrusted to Farnstrom Mortuary, Independence.

The family of Richard Earl Walker created this Life Tributes page to make it easy to share your memories.

Send flowers to the Walker family.