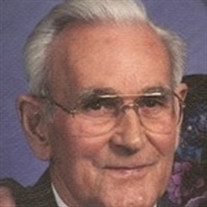 Obituary, Richard Louis Melton "Dick" March 19, 1922 ~ May 22, 2008 Richard Louis Melton "Dick" of Monmouth, Oregon passed away May 22, 2008 at the age of 86. Dick was born in Redmond, Oregon March 19, 1922 to Weaver and Marie Melton. Moved to Toledo, Oregon at the age of 2 graduating from Toledo High School in 1940. After serving the U.S. Navy during WWII he returned to Toledo where he met Geraldine Rae Coleman they were married November 10, 1946 in Portland, Oregon. Lived in Toledo working for C.D. Johnson Saw Mill, later G.P. Paper Mill until retirement in 1984. After retiring he moved to Monmouth, Oregon. Dick enjoyed mushroom hunting, hunting, camping, gold mining, and many other outdoor activities. He was a member of the Mason's where he was awarded the 50 year jewel and was a Worshipful Master Mason with the Toledo Lodge. Dick was a member of Eastern Star and the Elks Lodge. Survivors include his wife Geraldine "Geri" R. Melton of Monmouth, Oregon, son David Carol Melton of Monmouth, Oregon, daughters Louise Jim Breen of Eugene, Oregon, Cheryl Jon Debban of Salem, Oregon. 5 grandchildren and 7 great grandchildren. Proceeded in death by 2 brothers Leroy and Lawrence Melton and a grandson Tom Melton. Funeral Service will be held 11:00am Thursday May 29th at Cornerstone Christian Center 4395 Independence Highway Independence, Oregon 97351 with a reception following. Private Interment will be held at Fir Crest Cemetery in Monmouth. Arrangements Entrusted to Farnstrom Mortuary, Independence

The family of Richard Louis Melton created this Life Tributes page to make it easy to share your memories.

Send flowers to the Melton family.