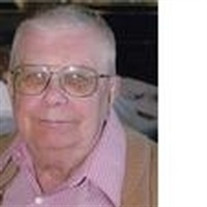 Obituary, Paul Romanick April 13, 1923 ~ January 24, 2008 Paul Romanick of Monmouth, Oregon passed away January 24, 2008 at his home at the age of 84. Paul Romanick was born April 13, 1923 in Wilton, North Dakota to Steve and Mary Romanick. As a child he moved with his family to Butte, Montana where he was raised. As a young adult he enlisted in the United States Army Air Corps. He then met Jean Marie Baier and they married September 6, 1953. Together they moved to Seattle, Washington where he worked as a bus driver for Seattle Transit. He then was employed by The Boeing Company and worked on gas turbine engines. Later he worked with Boeing in cooperation with the Air Force on the Minute Man Missiles throughout the Midwest. He retired from Boeing Company and moved to Oregon twenty years ago. He drove school bus for Hendrick's and Laidlaw in Forrest Grove. He is survived by his wife Jean, their son Ron Romanick and grandsons Preston and Gavin, their daughter and son-in-law Dan and Marilynn Daberkow and grandsons Roman and Austin. He is preceded in death by son David Romanick. Paul enjoyed traveling with his wife, especially to his beloved home state of Montana. He always enjoyed sports, especially football and baseball. Most recently he traveled with Jean and Austin to Alaska on a cruise. He took a lot of pleasure in attending his grandson's sporting events and music concerts. He was always an encouragement to children and grandchildren, often telling them "There is no such word as can't. You can do whatever you put your mind to". Paul will always be remembered by his family and friends as a loving husband, son, brother, father, grandfather and uncle. Contributions may be made to Make-A-Wish Foundation in care of Farnstrom Mortuary 410 Monmouth St. Independence, Oregon 97351. Visitation will be held Tuesday January 29, 2008 from 1pm to 5pm at Farnstrom Mortuary. Funeral Service will Military Honors will be held 12:00pm Wednesday January 30, 2008 at Willamette National Cemetery in Portland, Oregon. Arrangements Entrusted to Farnstrom Mortuary, Independence.

The family of Paul Romanick created this Life Tributes page to make it easy to share your memories.

Send flowers to the Romanick family.