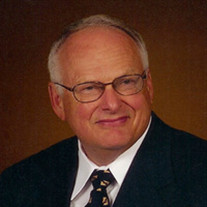 Paul Robert Munson, DO April 3, 1939 ~ March 31, 2020 Paul Robert Munson, DO died in Salem, Oregon, on March 31, 2020 at the age of 80.  He was born in Klamath Falls, Oregon, on April 3, 1939. Paul lived most of his life in Oregon.  He was born to Caroline (née Sjödin) and Sverre Munson (née Hundeide) in Klamath Falls where he was raised with his sister, Mary Ann.  He graduated from Klamath Union High School, Central Washington University, and Kirksville College of Osteopathic Medicine.  Following graduation he practiced Family Medicine in Oregon - Estacada, Monmouth, and Dallas.  He married Patricia Graham of Moses Lake, Washington in 1959 and they divorced in 1997.  He married Rosalie Smith of Salem, Oregon, in May 2005. He was active in the  Monmouth-Independence community for thirty-five years. He was a member of Rotary, the Chamber of Commerce, the Independence Elks Club, and several professional organizations.   He was an active member of Faith Lutheran Church. Paul loved sports and music.  He skied, bowled, and golfed.  He followed local, regional and professional sports teams. He liked to dance.  Paul enjoyed music and played several instruments.  He joined Morningside United Methodist Church where he and Rosie sang in the choir. After retirement, Paul and Rosie spent winter months in Arizona.  He joined a bowling team, sang with a men's group and choir at the resort. Paul is survived by his loving wife, Rosie; his five children, Diane (and James) Langdon of Boise, ID; Tracey (and Martin) Schnabel of Hoboken, NJ; Brent Munson of Spokane, WA; Tana (and Anthony) Foster of Sherwood; and Travis (and Sarah) Munson of Lebanon; his sister Mary Ann (and Kenneth) Ellis of Salem; and his seven grandchildren and one great-grandchild. Contributions may be made in his memory to: Union Gospel Mission of Salem https://ugmsalem.org/ The Humane Society https://www.humanesociety.org/ Morningside United Methodist Church http://morningsideumc. net/ Farnstrom Mortuary is caring for the family.

The family of Dr. Paul Robert Munson DO created this Life Tributes page to make it easy to share your memories.

Send flowers to the Munson family.