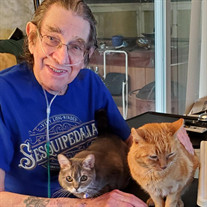 Paul J. Eide, 78, artist, musician, and raconteur, died Sunday, Oct. 24 at Salem Hospital. He is survived by his loving wife and best friend, Susanne Eide, his sons Sean Freeman and James Eide, daughter-in-law Jean Freeman, grandchildren Sierra Davis, McKenzie Freeman, and Hunter Freeman, great-grandchildren Joshua and Isaac Davis, and siblings Sarah Eide, Philip Eide, and Daniel Eide. He is also survived by his in-laws who became a second family: parents-in-law Walt and Carole Rufer, brother-in-law Emil Rufer, and sister-in-law Cheryl Rufer. Paul, born on May 14, 1943, in Portland, Oregon, was the son and step-son of Audrey and Osborn Eide. He attended school in Portland, Gresham, and Troutdale, Oregon, finishing secondary education at Centennial High School before joining the U.S. Navy. He worked for a time at Reynolds Aluminum before leaving to pursue his dream to become an artist and musician. He later studied art and music at Marylhurst University. Paul met his beloved wife Susanne through her brother, and they spent the next 38 years together going from one adventure to another. Together, they had a reputation of being incredibly silly while shopping, cracking people up with their puns and long running gags, and spending WAY too much time in bookstores. They enjoyed everything from travel, getting into deep discussions about history and philosophy, viewing art, listening to music, and watching classic movies and old Warner Bros. cartoons. A devoted public servant, Paul served on the school board of the Santiam Canyon School District and the fire board of the Idanha-Detroit Rural Fire Protection District. He remained committed to making the world a better place up to the day he died, supporting those organizations as well as the Marion & Polk County Food Bank. In honor of Paul, there will be a celebration of life on Thursday, Nov. 11 at 1:00 pm at Farnstrom Mortuary in Independence. In lieu of flowers, Paul asked that people donate to the Idanha-Detroit Rural Fire Protection District or the Santiam Canyon Scholarship Fund.

The family of Paul Jean Eide created this Life Tributes page to make it easy to share your memories.

Send flowers to the Eide family.