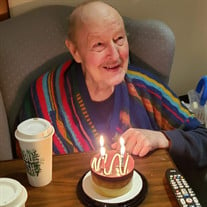 Orvis Otho Tilby, born April 28,1936, in Jerome, Idaho, was a learner. In fact, for many years he was president of The Learner’s Society, an informal group he created with friends who also shared his curiosity for and love of life. Some of Orvis’ favorite topics included birds, plants, and wasps. His love of nature came from growing up on his family’s ranch in Nevada. He also hunted and skied as much as he could. Orvis spent more of his time skiing at Utah State than studying and he soon dropped out to marry Chris, start a family and work in Ohio. Later in California, Orvis helped design a rice plant and married his second wife, Joan. With his family he moved to Monmouth, OR where he planned to finish college with a degree in special ed, but soon discovered a formal education still wasn’t for him. Instead he studied his passions on his own time and worked as a welder and ready-mix truck driver. Orvis met his third wife, Cheryl, in Monmouth, and together they built a blended family that included past spouses at birthdays and holiday meals. They loved to garden, philosophize, welcome friends and later in life, travel! Together they went to Spain, France, Switzerland, Portugal, Italy, Morocco and Ecuador. After Cheryl died, Orvis traveled to Canada and Puerto Rico. Orvis’ last years were challenged with health problems, but his fourth wife, Peggy, helped him to smooth some of the edges. Orvis continued to read and study in his chosen fields and even got published in New Scientist because of his experiments with wasps. He loved to hear about the adventures his friends and family were having. Orvis is survived by his two sisters Kay Furniss and Connie Romero, his children Roy Tilby, Aaron Tilby, Lise Adams Sherry, Suzzi ViTaris and Mona Hand, and a passel of grandchildren and great grandchildren. He died July 2, 2021, at home.

Orvis Otho Tilby, born April 28,1936, in Jerome, Idaho, was a learner. In fact, for many years he was president of The Learner&#8217;s Society, an informal group he created with friends who also shared his curiosity for and love of life. Some... View Obituary & Service Information

The family of Orvis Otho Tilby created this Life Tributes page to make it easy to share your memories.

Send flowers to the Tilby family.