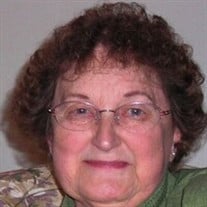 Marilyn J. Paulson, age 83, passed away on February 25, 2021 after several years of cognitive decline. She was born September 8, 1937 in Detroit Lakes, Minnesota to David and Agnes Nelson. She married the love of her life, Casper F. Paulson Jr. (Bud), in August 1953. Marilyn spent most of her childhood in the Portland area and had strong memories of surviving the 1943 Vanport flood that washed away their family home and most of their belongings. She and Bud lived briefly in Evanston, Illinois, where Bud completed his military obligation and she finished high school. They returned to Portland where Marilyn earned her undergraduate degree in Education from Portland State College in 1961 (now Portland State University). They moved to Independence, Oregon in 1962 with their young son (Erik) and over the next several years added two more children to their family (Karl and Sonja). Marilyn was a dedicated elementary school teacher. She began teaching at Jason Lee Elementary in 1961 in Portland, Oregon; taught for a year at Grant Elementary in Salem, Oregon; but spent the majority of her professional career in the Central School District at both Independence Elementary and Henry Hill Elementary. Her dedication extended to the decades-long practice of handing out colorful #2 pencils to trick or treaters rather than candy. The kids loved it and so did she! She also valued the arts and took many different opportunities to foster this value in her children and grandchildren with music lessons, trips to museums, concerts, plays and many other cultural events. She was committed to continuing her own education as well, earning her master’s degree in 1966 from Oregon College of Education (now Western Oregon University) while raising two of her children and teaching elementary school. Even after retirement, she continued her love of learning as she and Bud would vacation by attending Elderhostel courses all across the country. Marilyn was a devoted member of the Lutheran Church and attended First Immanuel Lutheran in Portland, St. Mark Lutheran in Salem; and Trinity Lutheran in Dallas. She was preceded in death by her husband, Bud, niece Kristin Landon, and nephew Kjell Sporseen. She is survived by her children: Erik Paulson (Julie), Salem, Karl Paulson (Mary), Salem, and Sonja Compton (Gary), Brownsville; grandchildren Elliot Paulson, Jazmine Compton, and Bailey Compton. She is also survived by her sister, Carol Sporseen (Greg), in-laws Jim and Frankie Paulson, nieces, nephews, cousins, and longtime friends. The family would like to thank the staff at the Dallas Retirement Village Independent Living, Assisted Living, and Memory Care, and Willamette Valley Hospice for the care they provided to Marilyn. In addition, the family is also grateful to Farnstrom Mortuary for their services. Services will be postponed to a time when family and friends can gather safely. Please visit Marilyn’s memory page at www.FarnstromMortuary.com. In lieu of flowers, the family asks that donations in Marilyn’s name be sent to Marion-Polk Food Share, MercyCorp, or the Carter Center. Farnstrom Mortuary is caring for the family.  To send a flower arrangement or to plant trees in memory of Marilyn Jane Paulson, please click here to visit our Sympathy Store.

Marilyn J. Paulson, age 83, passed away on February 25, 2021 after several years of cognitive decline. She was born September 8, 1937 in Detroit Lakes, Minnesota to David and Agnes Nelson. She married the love of her life, Casper F. Paulson... View Obituary & Service Information

The family of Marilyn Jane Paulson created this Life Tributes page to make it easy to share your memories.

Send flowers to the Paulson family.