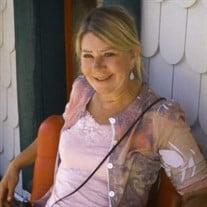 The beautiful mother, wife, and caring friend Laurel Ellen Waterbury-Toole, passed away peacefully at the Salem Hospital on April 1st, 2021, at the age of 61. Laurel’s life came to a sudden end after three months of a courageous battle with cancer, surrounded by love from her friends, children and adoring husband of six years, John “David” Toole. Laurel “Lolly” was the treasured daughter of the late Captain John Roger Waterbury and Barbara Anne Waterbury, born on June 26th, 1959, in Medford Oregon. Her family lived in Ashland Oregon with her older brother Sean Sexton Waterbury. Not long after Laurel was born her family moved to California where her younger sister Dale Anna Waterbury was born. In 1965 her family moved to Lakeview Oregon and bought the Sailboat Ranch where Laurel would make decades of memories with multiple generations of children, family, animals, and love. Laurel’s half siblings Mike and Kelly Reed (twins) would also come enjoy many summers on the ranch. Her father’s career brought her family to Tehran, Iran in 1966 where Laurel excelled in the American School. Laurel learned tap, jazz, ballet, and theater from her Mother Barbara. Laurel and her family lived in Singapore off and on for much of the 70’s. Laurel and her siblings attended the Singapore American School where Laurel excelled in her academics. Laurel attended schools in Scotland, the Canary Islands, Spain, Taiwan, and other parts of southern Europe, when she was not in Singapore. Laurel was almost 17 when her family moved back to the Sailboat ranch in Oregon, and she graduated from Lakeview High in 1977 alongside her lifelong dear friends. Laurel married young and had her son Christopher Benjamin Cannon in 1981. Her first marriage was short, but she cherished her beloved son. Later she would meet and marry Brian Allen Cuthbertson (married from 1990-2010) and have her precious baby girl Stephanie Brooke Cuthbertson in 1988. Laurel, Brian, and the kids moved from Lakeview to Monmouth Oregon where Laurel Attended College at Western Oregon State College in 1992. Laurel graduated Summa cum laude in 1996 with a Bachelor of Science in English Literature and Language Arts. She continued her Master of Science program course work in English Literature and Language Arts at Oregon State University. During and after her education, Laurel worked at The Teaching Research Institute at Western Oregon University from 1998-2011. Among her many career achievements, Laurel was on the Central High School Panther Club Executive board of Directors, Talmadge Middle School improvement plan and investment plan, and was a Host mom for the EF foundation for Foreign Study where she inherited a second son, Jacob West in 2005. She loved spending her time giving back to her community. In 2011 Laurel finally meet the man she had been searching for all her life to cherish and love her unconditionally. Laurel and David got married in 2015 at the Polk county courthouse. She became like a mother to his two sons Luke and Keenan Toole. Laurel was fortunate and gracious to have had David, who devoted his time to making her feel special and loved. She loved spending time with her husband, family, and animals. Laurel had a deep passion for reading, writing and art. She coveted her huge library that contained many books of philosophy, old English poets, every Tolkien novel written and her first addition Harry Potter Series. Laurel spent much of her time in the garden tending to her enormous plants. She left behind many beautiful paintings, hand thrown ceramics and knitted winter wear for her family to enjoy for years to come. Lolly will be forever missed for her great sense of humor, amazing outfits, enormous holiday spirit and ability to turn any event into a dance party. But most of all she will be missed for her caring heart and kind spirit. There will be a celebration of life to honor Lolly’s memory in an announcement to come. Farnstrom Mortuary is caring for the family.

The beautiful mother, wife, and caring friend Laurel Ellen Waterbury-Toole, passed away peacefully at the Salem Hospital on April 1st, 2021, at the age of 61. Laurel&#8217;s life came to a sudden end after three months of a courageous battle... View Obituary & Service Information

The family of Laurel Ellen Waterbury created this Life Tributes page to make it easy to share your memories.

Send flowers to the Waterbury family.