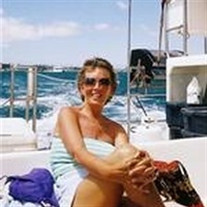 Kaye Suzanne Seibert Mulkey August 4, 1956 ~ December 2, 2008 Kaye Mulkey of Monmouth, Oregon went to be with the Lord on December 2, 2008 in the comfort of her home after a long and courageous battle with cancer. Kaye was spunky, full of life, and inspired so many with her "never give up" spirit. Kaye was born in Dallas, Oregon, the youngest of Bud & Julie Seibert's four children and the only girl of the bunch. She was a tomboy in childhood and could keep up with the best of the boys. Kaye also loved spending time with her grandma Hamilton; they would cook and bake up a storm, a skill she carried into adulthood. She also adored spending time at her Aunt Shirley and Uncle Bert's home with her cousins. Kaye was first married at the tender age of 19. Although the marriage was not to last, out of it came her daughter and only child, Kindi. She and Kindi were not only mother and daughter, but also the best of friends. Kaye was a single mom for many years, and greatly cherished her role as a mother. She called Kindi her "precious angel". In 1993, Kaye married the love of her life, Leo Mulkey. She loved her role as a farmer's wife and took great delight in making large, delicious meals not only for her husband, but sometimes the whole crew. She even got involved in tractor pulling. Outside of farm season, they enjoyed time together at OSU Beaver football games. Wherever Leo was is where Kaye wanted to be. On November 18th, 2008, they celebrated 15 years of marriage. Kaye loved life, and like her father before her, never met a stranger. She was the life of the party - a true social butterfly at heart. With her contagious smile and giving spirit, she made those around her feel good just by being with her. Survivors include: her husband, Leo Mulkey or "Babe" - their name for each other; daughter and only child, Kindi King son-in-law Erik King; mother, Julie Seibert; brothers, Craig Seibert sister-in-law Susie Seibert and Kent Seibert. She is also survived by her unborn grandchild, Kevin Matthew King, due on February 25, 2008; she will get to meet him someday. Kaye was preceded in death by her father, Loren "Bud" Seibert. A Celebration of Life will be held 11:00am Friday December 5th at Monmouth Christian Church. A private graveside inurnment ceremony will be held for family prior to the public memorial service. Contributions may be made to the Kaye Seibert Mulkey Cancer Fund at OSU Federal Credit Union.

Kaye Suzanne Seibert Mulkey August 4, 1956 ~ December 2, 2008 Kaye Mulkey of Monmouth, Oregon went to be with the Lord on December 2, 2008 in the comfort of her home after a long and courageous battle with cancer. Kaye was spunky, full of life,... View Obituary & Service Information

The family of Kaye Suzanne Seibert Mulkey created this Life Tributes page to make it easy to share your memories.