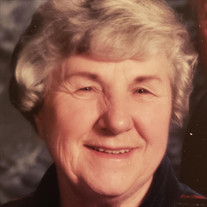 Kathryn (Katie) Rose Welzbacker, 91, of Monmouth, Oregon passed away peacefully at her residence at Dallas Retirement Village on October 17th, following a long-term battle with dementia. Katie was the seventh child of Hermann H. and Ruth E. Walter, born August 7th, 1930 in Oregon City. She grew up in Clackamas, Oregon, attending and graduating from Milwaukie UHS in 1948. After high school, Katie studied business and accounting at Vanport Extension Center, the initial founding institution for Portland State University. Katie met Bob, the love of her life, at the age of 14 during her sophomore year of high school. They married on April 1st, 1950, during Bob's 2-week military leave from the US Navy, leading to a 70+ year marriage adventure. As a military spouse, Katie first moved to San Diego, CA, spent a period as a "war widow" in Fortuna, CA during Bob's Korean War Service, and then later in Boston, MA. After naval discharge in September 1952, the couple returned to the Portland area. Following the growth of their family with the birth of daughters Nancy in 1953, and Robin in 1955, the family moved to Corvallis, where Katie earned her OSU-BS degree in "putting husband through." Degree in hand, the family moved back to California for a few years, where, in 1961 they added son Todd. They then moved back to Oregon, settling in their true home of Klamath Falls, where they lived from 1961 until 2008. Due to health-related issues, they were brought full circle to the Central Willamette Valley, landing their final residence in the Monmouth and Dallas area. Katie and Bob had many outdoor adventures at the coast, clamming, fishing, and crabbing. Katie was not a fan of being "on the boat", but whatever Bob caught, she would clean, cook, and can. Their favorite "clam dig" would often put them in hip-deep saltwater in Netarts or Charleston Bay. Katie was an extremely talented seamstress, knitter, and crafter with an amazing eye for detail. She delighted in knitting her personalized one-of-a-kind "Christmas Stocking Creations" for generations of family and friends. She also enjoyed many social activities like playing cards, especially bridge and bunco, and bowling league. Katie and Bob lived their lives with continuous large projects, building and remodeling their various homes, always supporting each other. Katie had an extremely strong work ethic, working outside the home in various office managerial and accounting positions, beginning at Geary Bros Ranch (now Running Y). Beyond work, however, Katie's "love" was supporting her immediate and extended family. She and her silliness, humor, strength of will, and love will be strongly missed. Katie is survived by daughter Nancy (Larry) Buehler of Monmouth, Oregon, daughter Robin Townsend of Independence, Oregon, son Todd (Lorrie) Welzbacker of Saline, Michigan, grandchildren Grant Buehler, Allison (Gabriel) Enriquez, Danielle Townsend, Matthew (Kelly) Townsend, Jarod Welzbacker, Katelyn (Ben) Rittinger, and Ethan Welzbacker; and 5 great-grandchildren. Katie is preceded in death by her husband Robert, brothers Philip, William, and Richard, sisters Elsbeth, Mary and Shirley, and grandson David Townsend. Katie was placed to rest with Bob at Willamette National Cemetery. In lieu of flowers, the family requests donations to Shriners or a charity of your choice. Farnstrom Mortuary is caring for the family.

The family of Kathryn Rose Welzbacker created this Life Tributes page to make it easy to share your memories.

Send flowers to the Welzbacker family.