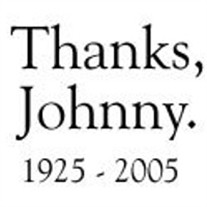 John William Carson, the veteran comedian and talk show host who ruled late night TV for 30 years, died on Jan. 23 of emphysema. He was 79. Born in Corning, Iowa, and raised in Norfolk, Neb., Carson was an above-average student who made his mark as the class clown. He performed magic tricks for local Rotary groups, impersonated Jack Benny for classmates and wrote a humor column for his high school newspaper. Shortly after graduation, Carson enlisted in the Navy and served as an ensign aboard the U.S.S. Pennsylvania during World War II. Upon his return to the states, Carson attended the University of Nebraska. He performed in the school's theatrical productions and worked part-time for the KFAB radio station in Lincoln, Neb. Carson earned a bachelor's degree in only three years, then took a job conducting interviews at WOW-590 AM in Omaha. In 1951, he moved to Los Angeles and broke into television as an announcer for KNXT, the local CBS affiliate. Carson persuaded the station to give him a 15-minute, Sunday afternoon comedy show "Carson's Cellar", which led to a writing stint with "The Red Skelton Show." When Skelton injured himself two hours before show time, CBS allowed Carson to fill in. The comedian was so popular that the network eventually gave him his own program. "The Johnny Carson Show" went through several writers and directors, but couldn't capitalize on his talents and was soon canceled. Carson moved to New York in the mid-1950s and made guest appearances on various television programs, including "The Tonight Show" with Jack Paar. He hosted the ABC game show "Who Do You Trust?," which featured Ed McMahon as its announcer, until 1962. That same year, he took over for Paar in the late night timeslot. For three decades, Carson appeared on millions of television sets following McMahon's classic intro "Heeeeere's Johnny!" The dapper host also became a household name and one of the highest-paid performers in television history. With a polite demeanor, Carson skewered presidents and other politicos in his fast-paced opening monologue. With impeccable comedic timing, he starred in a variety of skits and often played second fiddle to a monkey wildcat or marmoset. With charm and wit, he interviewed more than 22, 000 guests and introduced America to entertainers such as Bill Cosby, Barbra Streisand, David Letterman, Joan Rivers, Woody Allen, Jerry Seinfeld, Billy Crystal, Roseanne Barr, George Carlin, Garry Shandling, Steve Martin and his successor, Jay Leno. Carson's biggest audience tuned in on Dec. 17, 1969, to watch ukulele player Tiny Tim marry his 17-year-old bride, Miss Vicki. Although the couple later divorced, an estimated 58 million viewers watched their nuptials on "The Tonight Show." Married four times himself, Carson frequently mocked his past relationships and expensive alimony payments. America's late night king of comedy hosted the Academy Awards five times and occasionally headlined at top hotels in Las Vegas and Atlantic City, N.J. He won six Emmy Awards, the Academy of Television Arts and Sciences' Governors' Award and a George Foster Peabody Award. Carson was inducted into the Television Hall of Fame in 1987, and received a Presidential Medal of Freedom, America's highest civilian honor, in 1992. His star on the Hollywood Walk of Fame is located at 1751 Vine Street. Carson retired in 1992 and kept a low profile during the final years of his life. In his last show, he told the audience: "I'm one of the lucky people in the world. I found something I always wanted to do and have enjoyed every minute of it." For 30 years, no matter what was going on in the world, Johnny Carson could make us laugh at the end of the day. Even years after his retirement, he remained the unachievable standard for late-night entertainment. We will all miss his humor, class and charm.

John William Carson, the veteran comedian and talk show host who ruled late night TV for 30 years, died on Jan. 23 of emphysema. He was 79. Born in Corning, Iowa, and raised in Norfolk, Neb., Carson was an above-average student who made his... View Obituary & Service Information

The family of Johnny Carson created this Life Tributes page to make it easy to share your memories.

Send flowers to the Carson family.