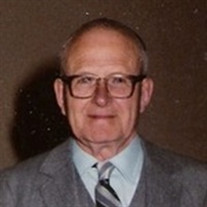 In Loving Memory of John William Lamers February 13, 1918 - September 22, 2008 MONMOUTH - John William Lamers of Monmouth, Oregon passed away September 22, 2008 in his home near Monmouth at the age of 90. John was born February 13, 1918 in Ryegate, Montana to William and Alice Lennon Lamers. He attended rural elementary schools through the 8th grade and then graduated from Billings High School in 1936. After receiving a teaching certificate at Eastern Montana Normal School in 1938, John taught school for several years. He then entered the Army and was stationed at Camp Adair where he and Hodelia were married on July 24, 1943. Hodelia was the love of his life and he cherished their life together. He lived to celebrate their 65th wedding anniversary in July. In 1944 John was deployed to Europe where he served in the 4th Armored Division under General Patton's Third Army. He served in the Army for 4 1/2 years and was honorably discharged in 1946. After returning to Oregon John graduated from Oregon College of Education and taught school and served as principal at Rickreall Elementary School. John then went to work for the Oregon Liquor Control Commission after teaching himself accounting by lantern light. He first worked as a State auditor and then opened and managed the first liquor agency in Corvallis and later managed the liquor agency in Dallas. In 1976 he was elected Polk County Assessor and served 4 years. John raised Tennessee Walking Horses for nearly 40 years and was a charter member who formed the Tennessee Walking Horses Exhibition of Oregon in 1963. Hodelia and John showed horses for years and raised Ore-tana Rocket to be a Supreme Versatility Champion whose picture hangs in the Tennessee Walking Horse Hall of Fame in Tennessee. John enjoyed pinochle, square dancing, gardening and spending time in the woods. In 1961 John and the family moved from a Corvallis farm to a property near their current home and began livestock and crop farming. In 1974 the first large tree planting was made. In 1975 John sold 200 acres of open farmland and begun focusing on tree farming. He considered his greatest accomplishment to be the completion of his vision of converting nearly 500 acres from brush to a productive tree farm with the aid of his family. Survivors include his wife, Hodelia Lamers of Monmouth, Oregon; children oldest to youngest, Gloria Bergquist of Portland, Kathleen Fella of Albany, Bill Lamers of Monmouth, Terry Lamers of Dallas, Lee Lamers of Monmouth, and Jan Brown of Kennewick, Washington; sister, Gloria Mulvey of Seattle, Washington; 10 grandchildren; and 2 great-grandchildren. Private Interment will be held at Fir Crest Cemetery Smith section in Monmouth, Oregon, which overlooks John's property. Arrangements entrusted to Farnstrom Mortuary, Independence. The family cordially invites everyone who knew John to attend the Celebration of Life which includes a short service, food, music, and review in pictures and video. The celebration will be held at 11 a.m. on Saturday, September 27 at St. Patrick's Catholic Church in Independence at 1275 E. Street, Independence, OR 97351. In lieu of flowers donations may be sent to St. Patrick's Catholic Church or Willamette Valley Hospice who were a wonderful source of support during John's final days.

The family of John William Lamers created this Life Tributes page to make it easy to share your memories.

Send flowers to the Lamers family.