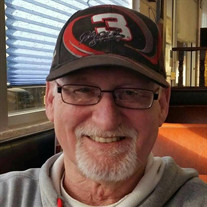 John “Johnny” Harry Kosanke, 73, passed away Tuesday, April 13th at Providence Hospital in Portland, OR from respiratory failure. John was born to the late Edwin Kosanke and LaVonne (Rygmyr) Kosanke in Tacoma, WA, on February 5, 1948. His parents soon moved to Albany, OR where John spent most of his life. John attended Albany Union High School and then went to serve in the US Army from 1965 – 1968. He was stationed in Korea and served as a tank mechanic in the 78th Field Artillery Battalion 2nd Armed Division. Once discharged honorably, he returned to Albany and started his career as an auto mechanic, which was his passion. He was an ASE Certified mechanic for Toyota and Chevrolet for several local dealerships. John was a classic car enthusiast; he enjoyed golf, Nascar, playing pool & dice, family gatherings, and his vast amount of friends. He was loved by many in the community, spending his days enjoying the company of friends and local establishments. John loved to talk and tell stories, share pictures and just enjoy daily life. John is survived by his daughter, LaVonne and her husband Mike Carey; grandsons, Joe Walters, Cleveland Walters, Timothy Walters, and Jacob Walters; and his sister Pam McLoughlin from Salem, NH. He was preceded in death by his father Edwin Kosanke, mother LaVonne Hazel (Rygmyr) Kosanke Powell, and brother Monte Kosanke. In John’s honor, there will be a burial gathering on Saturday, April 24th, 10:00 am at Hilltop Cemetery in Independence, OR. Following the burial, there will be a memorial gathering at the VFW in Albany, OR at 12 noon. All are invited to attend and share stories of John. Memories and condolences can be shared on this memorial website.

The family of John Harry Kosanke created this Life Tributes page to make it easy to share your memories.

Send flowers to the Kosanke family.