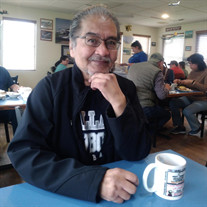 Jesse Leon Camero of Independence Oregon, passed away on Friday January 7, 2022, at the age of 62. After years of battling with Cancer, he died peacefully in his home surrounded by family. Jesse was born on May 14, 1959, in Edinburg Texas to Jesus and Sadie Camero. As a very young boy he learned to work hard with his family, eventually relocating to Oregon. Jesse worked many years for Central School District, Ron Wilson Center and in 2004 when he moved with family in Canada, he worked at Lhawathet Healing Retreat Centre. In 1991 he met Lori and they were married in 2000. They enjoyed their time together with his son Bo and stepsons, Marcus and Jacob. Jesse loved spending time with the family camping at the lake or coast, playing games, cards, and telling stories around a fire. Jesse was very close with his brothers, sisters, aunts, uncles, cousins, nieces and nephews; he and his niece Alex Arreguin were very close she was like the daughter he never had. He loved to bring everyone together, family and friends, for BBQs and birthdays to laugh and joke around. Jesse enjoyed listening to music, especially cruising around to Elvis Presley and Bob Segar. He loved watching football and was a die-hard Cowboys fan. But his biggest passion was watching his grandchildren grow up and being involved in their lives. He was a strong patriarch for his family, a good friend to all and a man that would do anything for anyone else. He is loved and missed by many. He is preceded in death by his parents, Jesus and Sadie Camero. Niece Ariana Arreguin and nephews Jesse Valdez and Santiago Amaya. Jesse is survived by his son Bo (Gizell) Camero of Independence Oregon, Lori Camero of Independence Oregon and his stepsons Marcus Risteen of McMinnville Oregon and Jacob Coxen of Helena Montana. Grandchildren Adrian, Aliza, Amaryn, and Ariya Camero of Independence Oregon. Sisters: Rosa (George) Valdez, Diana Camero of Salem Oregon, Melinda (Freddy) Camero, Mary Arreguin of Independence Oregon. Brothers: Rick (Colleen) Camero, Rudy Camero, Jim (Trina) Camero, Fred Camero of Independence Oregon. A host of nieces, nephews, and cousins from Monmouth, Independence and Salem Oregon; and all his beloved family in Chehalis BC and Washington. A memorial service will be held in the spring.

Jesse Leon Camero of Independence Oregon, passed away on Friday January 7, 2022, at the age of 62. After years of battling with Cancer, he died peacefully in his home surrounded by family. Jesse was born on May 14, 1959, in Edinburg Texas to... View Obituary & Service Information

The family of Jesse L. Camero created this Life Tributes page to make it easy to share your memories.

Jesse Leon Camero of Independence Oregon, passed away on Friday...

Send flowers to the Camero family.