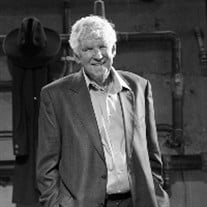 James Harvey Bones passed away peacefully on December 25, 2015 at Hopewell Hospice House in Portland, Oregon. He was born in Turner, Oregon on December 10, 1932 to father, Hollis Bones, and mother, Edna Elston Bones, and was raised in Brownsville, Oregon. He graduated from Brownsville High School at the age of 15 as class valedictorian and attended OSU for one year before starting work shoveling sawdust for the local sawmill. He rode saddle bronc as a young man until several broken ribs convinced him than an early retirement from rodeo was in order. Harvey married his wife, Florence Alice Johnson, of Redmond, Oregon and shortly returned to the sawmill industry, helping to build the mill in Maupin which ultimately became Wasco County's largest employer. Mt. Fir Lumber Company included the mills in Tygh Valley, Independence, Grants Pass as well as log yards and wood chip facilities throughout the Pacific Northwest. Mt. Fir chip plant was the first tenant of the Port of The Dalles. He held many industry leadership roles including a board position on the National Railroad Tie Association and served as president of the Western Forestry Products board. He was named the 1981 Business Leader of the Year by the Monmouth-Independence Chamber of Commerce and was named Oregon Business Leader of the Year by Associated Oregon Industries in 1982. In the course of his career, he rose from pulling green chain to President and CEO of Mt. Fir Lumber Company, exempifying the true American dream. After closing the sawmills due to the spotted owl issue, Harvey reorganized the chipping facility in The Dalles, Oregon that remained in business until 2002 when a wildfire burned the plant to the ground and that business closed as well. Harvey was pre-deceased by his wife of 62 years in 2014 but is survived by his four children, Susan (David) Huntington of Seaside, OR; Steve (Karen) Bones of Prineville, OR; Brian (Carol) Bones of Tigard, OR; and Larry (Cheryl) Bones of Rancho Cucamonga, CA. He is also survived by six grandchildren, Alix Huntington, Ryan Huntington, Spike (Nick) Huntington-Klein, Jeremy Bones, Mercedes Bones and Kassandra Bones and five great-grandchildre, Jordan Huntington, Jasper Huntington, Milo Huntington, Emry Seal and Uli Huntington. He is also survived by his sister, Irene Bennett, of Corvallis, OR, several nieces and nephews and his "special" cousin Bobby (Carrie) Bones of Salem, OR. Harvey's lifetime obsession with golf brought him many friends and great experiences. He lived nearly 20 years on the 12th fairway at Creekside Country Club in South Salem where he was surrounded by devoted friends. His family is very appreciative of the love and care his friends gave him until the very end of his life. A private burial will take place on Saturday, January 16, 2016 at 11:00 a.m. at Restlawn Memorial Garden in Salem. A public celebration of life will take place the same day at 1:00 p.m. at Creekside Country Club. Please join us for a toast to a great guy and a life well-lived! In lieu of flowers, memorials may be made in Harvey's name to either the Sprague High School golf team in Salem or the South Wasco County Ambulance in Maupin.

James Harvey Bones passed away peacefully on December 25, 2015 at Hopewell Hospice House in Portland, Oregon. He was born in Turner, Oregon on December 10, 1932 to father, Hollis Bones, and mother, Edna Elston Bones, and was raised in Brownsville,... View Obituary & Service Information

The family of James Harvey Bones created this Life Tributes page to make it easy to share your memories.

Send flowers to the Bones family.