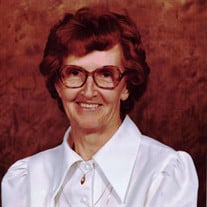 Hazel Belle Casey left this earth to be with her Heavenly Father May 10, 2022, as the result of an in-home accident. Hazel is survived by her son James (Anne) Casey and daughters Marilyn R. Smith and Colleen (Jack) Hendrix, 8 grandchildren and several great grandchildren. Hazel was born to Laura and James Loyd on October 4, 1926, (at home) in Dover, Arkansas. She lost her father at the age of 2 years to a stroke. Raised in rural Arkansas, she witnessed the coming of automobiles, electricity, and indoor plumbing. As an early teen she and her mother moved by horse and wagon to Russellville, Arkansas, where she attended school and became the first in her lineage to graduate high school. After graduating she worked as a telephone operator at a time when all calls were connected by an operator instead of today’s automatic switches. Soon after, she met Warren Casey. They married and moved to Tyler, Texas, where her son James was born. Two years later the family moved by farm truck to Westville, Oklahoma, where they lived on property owned by her in-laws. Less than a year later they moved by train to Portland, Oregon. One more year and her first daughter, Marilyn, was born in Portland. The family resided at various addresses in Portland and she again sought employment with the local telephone company. In 1955 her father-in-law’s failing health prompted the family to return to Oklahoma. During the next five years they inherited the farm and tried to “make a go of farming.” In 1958 her second daughter, Colleen, was born. In 1960 the growing family sold the farm and returned to Portland and then on to Yamhill, Oregon. Once again on a small farm, she kept the home and with her children tended country chores while Warren worked heavy commercial construction until 1966 when they once again “sold the farm” and moved to a small rural acreage in McMinnville, Oregon. While in McMinnville the children grew up, married, and got on with their lives. Hazel finally learned to drive and gained employment in a taco factory in McMinnville. She and Warren divorced and she sold the rural property, but she continued to live and work in the McMinnville area. After retirement she continued to live in the McMinnville area for several years. Then around 1998 she moved to Monmouth, Oregon, where she lived out the remainder of her years. Hazel’s greatest love where her children and grandchildren. Her greatest commitment was her close relationship with Christ and the Church of Christ all of her adult years. A Celebration of Life is planned for Wednesday, May 18, 1 pm at Church of Christ, 127 Heffley St N, Monmouth, Oregon. Inurnment will be at Fir Crest Cemetery.

Hazel Belle Casey left this earth to be with her Heavenly Father May 10, 2022, as the result of an in-home accident. Hazel is survived by her son James (Anne) Casey and daughters Marilyn R. Smith and Colleen (Jack) Hendrix, 8 grandchildren and... View Obituary & Service Information

The family of Hazel Belle Casey created this Life Tributes page to make it easy to share your memories.

Hazel Belle Casey left this earth to be with her Heavenly Father...

Send flowers to the Casey family.