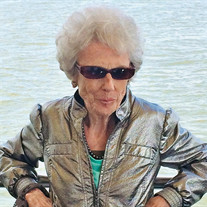 Geri M. Page, aged 95, longtime resident of Monmouth passed away October 22 at Willamette Valley Medical Center in McMinnville. She was taken to the hospital from her home in Newberg with a fracture of the hip, but was unable to undergo surgery. She was born in Devil’s Lake North Dakota on July 15, 1926 to James and Ruby Christie, the eldest child of four. She was married to Robert Leland (Bob) Page, who preceded her in death in 2013. She was a loving and dedicated mother to Gayle (deceased), Robert, Patrick and Michael, as well as a grandmother and great-grandmother. She graduated Sheyenne River Academy in North Dakota as valedictorian of her class in 1945, and then moved to the Northwest, spending the rest of her life in Washington and Oregon. She was the longtime Executive Assistant to the Vice President for Student Affairs at Oregon State University beginning in 1979, as well as the budget and personnel coordinator, receiving numerous awards and accolades for her invaluable service excellence. As indispensable as she may have been at OSU, she saw herself first and foremost as a wife and mother. Bob’s drama students at Western Oregon University knew Geri as the friendly supporter who cooked up the chili for “strike”, and organized things behind the scenes for every production. She was a constant source of practical, moral, educational support to her kids—always available to help with problems or projects. Since she could type over 100 words a minute, take shorthand, and was a maven at math and finances, she frequently found herself handling situations for her kids and grandkids by virtue of her expertise. She toured the West Coast as the assistant to her son Patrick’s illusion show, winning several regional and national magic awards, and was the Secretary-Treasurer of Ring 278 of The International Brotherhood of Magicians for many years. She was a voracious reader, and would frequently finish reading a major novel in a single day. This, coupled with her intimidating IQ and cunning for strategy, made her nearly impossible to beat at Scrabble. Outside her family, her most treasured role was as a member and generous supporter of her church. Raised as a Seventh-Day Adventist, she converted to Catholicism before marrying Bob, and later attended several denominations. Her devotion to God was the foundation of her life. A mass will be held at Saint Patrick’s Church in Independence, Oregon, and she will be laid to rest next to her husband at Restlawn Memory Gardens in Salem.

Geri M. Page, aged 95, longtime resident of Monmouth passed away October 22 at Willamette Valley Medical Center in McMinnville. She was taken to the hospital from her home in Newberg with a fracture of the hip, but was unable to undergo surgery.... View Obituary & Service Information

The family of Geri Marie Page created this Life Tributes page to make it easy to share your memories.

Send flowers to the Page family.