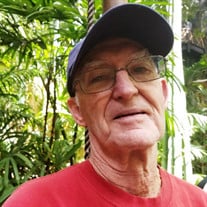 Service livestream: https://www.viewlogies.net/farnstrom/hOrRNlc-J Passcode: 964-818 Gerald Dean Parker September 16, 1941 – August 9, 2021 Gerald Dean Parker, also known as “Butch” has passed away in the small town of Dallas, Oregon on August 9th, 2021 at the age of 79. Gerald “Butch” is survived by his wife of 32 years, Carol Ann Parker and their four daughters, Kim, Michelle, Shauna and Crystal. Butch’s birthplace was Monterey Park, California and he resided in Independence, Oregon. Butch was a quiet and caring man who loved his family dearly and had a strong belief in the Lord. His deep affection for his children, 13 grandchildren and 11 great-grandchildren was apparent. He enjoyed traveling, among other things such as reading, ice cream, construction and remodeling his home. His traveling enjoyment was fulfilled visiting his daughters in Oregon, Alaska, Arkansas, and South Carolina. Butch is survived by his brother Ray of Grants Pass, and his sister Carolyn of Florida. Butch played the French Horn in school, which earned him a full-ride scholarship to Arizona State. After this, life took a left turn and he began his 31-year career at ODOT, where he started shoveling, then became an engineer, and ended his career as an Assistant District Director. He happily retired in 1991. In honor of Gerald “Butch” Dean Parker, we invite you to join us at his Celebration of Life on Monday, August 23, 2021 at 1 pm at Farnstrom Mortuary, Independence, Oregon. Contributions in his memory may be made to the Alzheimer’s Foundation at alz.org/donate. Farnstrom Mortuary is caring for the family. Share your memories and condolences at FarnstromMortuary.com.

The family of Gerald "Butch" Dean Parker created this Life Tributes page to make it easy to share your memories.

Send flowers to the Parker family.