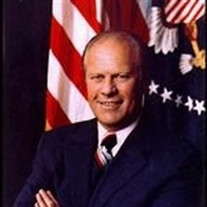 Gerald Rudolph Ford was the thirty-eighth president of the United States. Ford was originally named after his biological father, Leslie Lynch King. When his mother, Dorothy Ayer Gardner King, remarried, Ford was renamed after his stepfather. Ford attended the University of Michigan at Ann Arbor, where he was a gifted athlete and scholar. After college, he received offers from two professional football teams, but declined. Instead, Ford took a position as a boxing coach and assistant varsity football coach at Yale. While coaching at Yale, he earned his law degree. Ford's first foray into politics took place in the summer of 1940 while working on Wendell Willkie's presidential campaign. However, his passion was law. After Ford passed the bar exam, he and a partner set up a law partnership in Grand Rapids, Michigan. During World War II, he served in the U.S. Naval Reserve. After the war, he returned to Grand Rapids and become a partner in another prestigious law firm. In the late 1940s, Ford's interests turned toward politics. In 1948, with the encouragement of his stepfather, he ran for a seat in the U.S. House of Representatives and won. In the midst of the campaign, Ford married Elizabeth Anne Bloomer Warren. Together, they had four children: Michael, John, Steven and Susan. Ford served in the House for 25 years. He rose through the ranks of the Republican Party leadership, and eventually became House Minority Leader. Following the resignation of Vice President Spiro Agnew, Ford was appointed Vice President by President Richard Nixon. He was confirmed and sworn in on December 6, 1973. Ford was vice president only nine months before being sworn in as President of the United States on August 9, 1974, following Nixon's resignation in the wake of the Watergate scandal. Ford was the first person in U.S. history to serve as president without having been elected president or vice president. In his two-and-a-half years as president, Ford withdrew U.S. troops from Vietnam, was closely involved in mediation between Egypt and Israel, signed the Helsinki Human Rights Convention with the Soviet Union, and signed an arms limitation agreement with Soviet President Leonid Brezhnev. Domestically, Ford's top priority was ending the domestic and constitutional crisis resulting from the Watergate scandal. Believing that impeachment proceedings would prevent the country from moving forward, Ford pardoned Richard Nixon prior to the filing of any formal criminal charges. Public reaction was mostly negative, but Ford always maintained that it was the right thing to do for the good of the country. Despite one of the closest elections in history and three televised candidate debates, Ford lost to Jimmy Carter in the 1976 campaign. Many said pardoning Nixon cost Ford the election. After leaving office, President Ford continued to actively participate in the political process and spoke out on important political issues. Ford was an active participant in the Gerald R. Ford Foundation and the Presidential Library and Museum. He was an avid supporter of the Boy Scouts of America and was committed to improving the lives of all Americans. Ford's passion and devotion to the everyday civilian was recognized on multiple occasions. He is a recipient of the Presidential Medal of Freedom, Congressional Gold Medal, and the John F. Kennedy Profiles in Courage Award.

Gerald Rudolph Ford was the thirty-eighth president of the United States. Ford was originally named after his biological father, Leslie Lynch King. When his mother, Dorothy Ayer Gardner King, remarried, Ford was renamed after his stepfather.... View Obituary & Service Information

The family of Gerald R. Ford created this Life Tributes page to make it easy to share your memories.

Gerald Rudolph Ford was the thirty-eighth president of the United...

Send flowers to the Ford family.