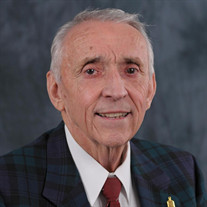 Donald Hubbard Duncan was born June 3, 1927 and died April 4, 2022. Don was raised on a small farm near Sunnyside, Washington. His parents were Hubbard, a farmer and Florence, a grade schoolteacher. He was preceded in death by two sisters Helen... View Obituary & Service Information

The family of Donald H. Duncan created this Life Tributes page to make it easy to share your memories.

Send flowers to the Duncan family.