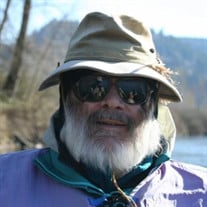 Dietrich Joseph Meyer 1947 – 2021 Known to his friends and family as Deke or DJ, Deke lived a life that reflected his childhood growing up in the 1950's and 60's in Colorado. Born in Colorado Springs on June 18, 1947, he lived and went to school in Lakewood, on the open prairie at the foot of the Rockies. His parents, Dietrich Elher Meyer and Catherine Rose Lueb-Meyer, gave all seven of their children a sense of individual responsibilty, morality, and independence. The wild places in Colorado defined the course of his life. After an honorable discharge from the army in 1968, Deke roamed around the west working odd jobs, influenced by the tales told by his grandfather and the writings of Jack Kerouac. He returned to Lakewood periodically and for a time worked at National Jewish Hospital in Denver as a counselor. A trip to Oregon to visit a former army buddy introduced him to fly fishing western rivers and coastal waters. He fell in love with both and moved to Oregon to go to school at what was then Oregon College of Education in Monmouth, where he met his wife Barbara. After they both graduated, they moved to Coquille, Oregon, and then to Maupin, where he worked for the Dept. of Fish and Wildlife as a creel checker. While in Maupin, Deke tried his hand at writing in the evenings and successfully published several articles. On their return to the valley they settled in Monmouth, and while working in a local fly shop Deke began a career as a fishing writer. During the 20 years that he wrote full time, he published more than a dozen books and countless articles on fishing. He particularly enjoyed the field research. His love affair with fishing lasted his entire life: the solitude of wilderness, drifing a river in a wooden boat, the poetry and peace of flycasting. In his own words from his McKenzie River Journal: “December is a time of musing, a speculation on the year as a circle of time, another year we witness the carousel of seasons, the comings and going of birds, aquatic insects, cold, heat, rain and snow, and our own mingling with the river. I know that someday I will die and that my bones will turn to dust, not unlike the volcanic dust that forms the riverbed that cradles the McKenzie. And as such, I will be a part of the river just as much as I am a part of the river when I fish it...” Deke passed away on December 2, 2021, from a rare autoimmune disorder. He is survived by his wife of 46 years and partner in adventure, Barbara, his sisters Ellen, Loretta, Diane, Janet and Joan, and his brother Paul, as well as many nieces, nephews and grand nieces and nephews. Love remains. In lieu of flowers, donations in Dietrich's name may be made to Doctors Without Borders. Farnstrom Mortuary is caring for the family.

The family of Dietrich Joseph Meyer created this Life Tributes page to make it easy to share your memories.

Known to his friends and...

Customized sympathy cards. Mailed for you.