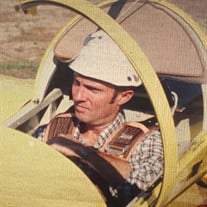 DAVID ARTHUR MARTIN Sept. 30, 1938 - June 12, 2021 David A. Martin of Independence, Oregon, died on June 12, 2021, after a long illness. He was born in 1938 to Wilbert A. and Martha L. (Spickerman) Martin in Champaign, Illinois. The family lived in Freeport, Illinois, before moving to Colorado in 1954. Dave graduated from South Denver High School, attended the University of Colorado for two years, and then graduated from the University of Missouri with a degree in broadcast journalism. Dave was a naval officer, an aviation magazine editor and writer, and pilot of airplanes and gliders. Dave joined the U.S. Navy in 1961 and was commissioned as an officer in 1962. He married Lois that year in Denver and moved to San Diego for training as an F-4 Phantom II radar intercept officer. He served in carrier-based fighter squadrons (VF-21 and VF-11) during peacetime and the Vietnam War; his onshore duty included involvement in test and evaluation of missiles and F-14 Tomcat aircraft. He retired as a Regular Navy commander in 1982 and began a career in aviation journalism. For 17 years he was the editor of KITPLANES magazine about homebuilt aircraft and pilots. He flew more than 200 types of aircraft, built four aircraft, and was a flight instructor for 23 years. After retiring, Dave and Lois moved from San Diego to Independence and built a house at the airpark. They have been active members of the airpark and the greater Independence community. Dave was a long-time board member of the local YMCA and received a volunteer of the year award for 2020. He recently received a Good Neighbor Award from the City of Independence. Dave (W6KOW) was a devoted amateur radio operator active from his teens until a few days before he passed. He also loved radio control model planes and helicopters. He had the tools and know-how to fix almost anything. Dave loved to talk to everyone, friends and strangers alike. Dave is survived by his brother Richard (Boulder, Colorado), wife Lois, daughter Laura Barnes (Portland), sons Arthur (Independence) and Daniel (Albany, California), and four grandchildren, Russell and Melissa Barnes, and Ada and Cara Martin. Interment with military honors will be at Willamette National Cemetery. Farnstrom Mortuary is caring for the family.

The family of David Arthur Martin created this Life Tributes page to make it easy to share your memories.

Send flowers to the Martin family.