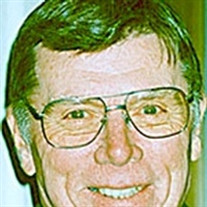 MONMOUTH - Dale passed peacefully on Monday morning, May 16, 2005 after a courageous battle with cancer. He was 73. Dale was born to James and Gladys Gibson in Phillipsburg, Kansas on July 25, 1931. Upon graduation from Phillipsburg High School in 1949 he attended Washburn University in Topeka for his first year of higher education. He participated in high school sports, and earned the nickname of 'Speedy,' retained to this day by his many Kansas friends. He had wonderful memories of riding his horse as his mode of transportation when he was a young teenager. Because the family lived in town, it was stabled in the family single-car, detached garage. In 1951, Dale and Twyla Joy Hyder of McMinnville were united in marriage and they spent some time living in Phillipsburg prior to Dale entering the U.S. Army Air Force in 1952. He served during the Korean Conflict until 1956 and upon discharge returned to Monmouth where he and Twyla continued to live until her passing in 1994. Dale enrolled in Oregon College of Education and received his Master's Degree in Special Education in 1960. He spent his entire career at Fairview Training Center, retiring as Director of Education in 1990. Dale enjoyed sports, hunting, fishing and dog training. He was a member of the North American Versatile Hunting Dog Association NAVHDA. He also enjoyed almost yearly trips back to his hometown for the class reunions held Memorial Day weekend. He liked to drive and see the beauty of nature in many states, but he always thought the Willamette Valley and Monmouth was best of all. It must have been God's will that he and Joyce Saul Veal renewed a friendship that began in 1941 while they were in grade school. Fifty years had passed when they were married in Monmouth in 1996. She survives him, along with his son, Terry and step-daughter, Nancy Marinelli, both of Monmouth; and step-son, Kerry Veal of Kezier. Dale enjoyed seven precious grandchildren. Also surviving is his sister, Helen Brewer of Newberg, and several nieces, nephews and cousins. Dale was an active member of the Monmouth Christian Church where he was groundskeeper until recent months. In lieu of flowers, it would be appreciated if contributions could be made to the church for grounds beautification and maintenance. Contributions may be sent to Monmouth Christian Church, 959 West Church Street, Monmouth, OR 97361 or Monmouth Senior Center for an electronic door to accommodate the handicapped, 180 S. Warren, Monmouth, OR 97361. Visitation will be from 4 to 7 p.m., Fri., May 20. Services will be held at 10 a.m., Sat., May 21, at Monmouth Christian Church under the direction of Farnstrom's Mortuary, with interment at Fir Crest Cemetery, Monmouth. On-line memorial is at www.farnstroms.com.

MONMOUTH - Dale passed peacefully on Monday morning, May 16, 2005 after a courageous battle with cancer. He was 73. Dale was born to James and Gladys Gibson in Phillipsburg, Kansas on July 25, 1931. Upon graduation from Phillipsburg High School... View Obituary & Service Information

The family of Dale L Gibson created this Life Tributes page to make it easy to share your memories.

Send flowers to the Gibson family.