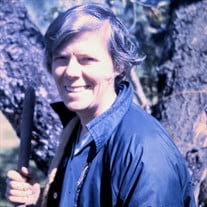 Carol Anne Reams was welcomed into heaven peacefully on the evening of Monday, September 20, 2021 with friends and family by her side. She was 91 years old. Born in Bryn Athyn, Pennsylvania on July 8, 1930 to Rev. Dr. Hugo Lj. and Constance (Waelchli) Odhner, she was one of eleven children. She graduated from Penn State with a degree in social work. She moved from Pennsylvania to Wallowa County in her twenties and worked there as a caseworker for the welfare department. It was there she met Robert Wayne Reams II, a WWII veteran and widower with four children, when she took her motor pool car to his service garage. They married in 1957 and had four additional children. After living in several homes in Eastern Oregon, the family eventually settled in Polk County. She worked as a homemaker and in a variety of other jobs, including caregiving and school bus driving. Carol was a true pioneer with grit, enduring many hardships in life. She was a faithful and dutiful wife and mother. Taking on life with her quick wit and sharp sense of humor, she was always aware of and connected to what was happening with her family and friends. She loved her garden and being in the kitchen cooking for people and preserving food. She was an independent woman and was in charge of her personal affairs until the time of her death. She is survived and will be greatly missed by her children Shirley Reams, Karin McKinney, James B. (& Susan) Reams, and Braden Reams; step-children Sally Reams, Laine Reams, and Robert Wayne Reams III; grandchildren Bethany Roberts, James J. Reams, and Easton Peoples; step-grandchildren Seth Reams, Tess Reams, and Heather Reams; one great-grandchild; brothers Victor and Hugo Odhner; and sister Doris Delaney. She is predeceased by her late husband, Robert Wayne Reams II, her step-daughter Beverly Roxanne Reams, and her step-nephew Jesse Gillette. A celebration of life will be held Saturday October 2, 2021 at 11 A.M., at Fircrest Cemetery in Monmouth, Oregon.

Carol Anne Reams was welcomed into heaven peacefully on the evening of Monday, September 20, 2021 with friends and family by her side. She was 91 years old. Born in Bryn Athyn, Pennsylvania on July 8, 1930 to Rev. Dr. Hugo Lj. and Constance... View Obituary & Service Information

The family of Carol Anne Reams created this Life Tributes page to make it easy to share your memories.

Carol Anne Reams was welcomed into heaven peacefully on the evening...

Send flowers to the Reams family.