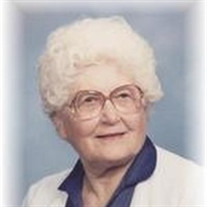 Bernice Korth Patterson March 30, 1913 ~ June 4 2006 Bernice Patterson 93 of Tualatin died June 4, 2006 at Cedar Crest Alzheimer's Special Care Center in Tualatin. Bernice was born March 30, 1913 in Kenaston, North Dakota the daughter of Edward and Clara Johnson Korth. She was raised in the Kenmare area of North Dakota and attended Kenmare High School. Shortly after she moved to Minot, North Dakota. She married Maurice Farnstrom in 1934. They moved to Bozeman, Montana in 1946. Maurice died in 1952. In 1954 she moved to Salem, Oregon where she worked for Willamette Valley Bank later U.S. Bank. In 1965 she married Lewis Patterson. She retired from U.S. Bank in 1975 and moved to Gleneden, Oregon shortly thereafter. Lewis died in 1987. Bernice moved to Independence, Oregon in 1989. She then moved to Salem in 1999, Monmouth in 2000, and Tualatin in 2002. Bernice was a member of Faith Lutheran Church in Monmouth. She enjoyed watching sports mostly the Blazers and Cowboys, playing cards, and traveling. She was preceded in death be her husband Maurice Farnstrom in 1952, husband Lewis Patterson in 1987, daughter Clarice Patyten in 1989, son Maurice Farnstrom in 2006 and sister Marie Wiik in 2003. She is survived by her son Eugene Farnstrom, 7 grandchildren, and 5 great-grandchildren. Memorial contribution can be made in Bernice's name to a charity of choice. Funeral service will be held 10:00 AM Thursday, June 8, 2006 at Farnstrom Mortuary in Independence, Oregon. Private inurnment will be Saturday at Mount Union Cemetery in Philomath, Oregon. Arrangements are entrusted to Farnstrom-Gable Funeral Chapel, Portland, Oregon.

The family of Bernice Elizabeth Korth Patterson created this Life Tributes page to make it easy to share your memories.