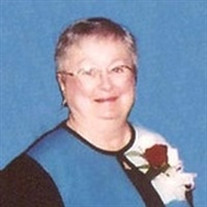 Barbara Jean Ehlert Rinella Barbara Jean Ehlert Rinella passed away in Portland, Oregon on May 29, 2007. She was born on April 28, 1926. Barbara was a devoted wife, mother, grandmother and great-grandmother. She was a graduate of Franklin High School in 1944 and attended Oregon State University. She married Liborio Philip Rinella on July 17, 1949 and was married for 56 years. She was a Camp Fire Leader for 10 years, a longtime member of the Council of Catholic Women, District 6. She was a past Queen of Job's Daughters of the Nile and she volunteered at the Shrine Hospital and Providence Hospital. Grateful to have shared her life are her children, Christine Rinella Nyquist and Steven R. Nyquist, Julianne Rinella Goodrich and Thomas William Goodrich, Thomas Philip Rinella and Lynn Miller Rinella, grandchildren Cara, Andrew and Kim, Kate, Philip, Amanda, Nicole and Claudio, Taylor, her great grandson Austin. Due to a fire at Ascension Catholic Church, where she was a long time member, a memorial Catholic mass will be held at Mt. Tabor Presbyterian Church on Friday, June 1, 2007 at 10:00am. As a breast cancer survivor of 22 years she wanted remembrances to Encore Breast Cancer support group of the American Cancer Society Oregon Division c/o YWCA 325 13th Street, Salem, Oregon 97301, and Shriners Hospital for children, 3101 SW Sam Jackson Park Road, Portland Oregon 97239. Arrangements are entrusted to Farnstrom-Gabel Funeral Chapel.

The family of Barbara Jean Ehlert Rinella created this Life Tributes page to make it easy to share your memories.