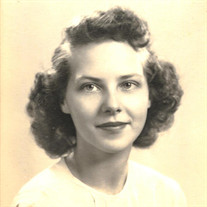 Barbara Jean Anderson Bullock, at the age of 91, passed away peacefully Friday, May 20, 2022, surrounded by her beloved family. Barbara was born on the 4th of July 1930 in Portland, Oregon. She was the oldest of 9 children born to William Clarke Anderson and Edna Marian Russell. She was a child of the depression and a daughter of the greatest generation of heroes. The early years of her life were spent in and around Silverton, OR where her parents met and married, and all but two of her siblings were born. As many families did during this time in history, Barbara or Jean, as she was known to most back then, and her family moved a number of times, going where the jobs were located. From Silverton, she spent 1st grade in Winlock, WA, then back to Silverton. During World War II, while her parents worked in the shipyards, they lived in Portland, and then moved again to Winlock. While her parents worked at the Shipyards in Bremerton, Jean stayed in Portland with family friends to complete the 8th grade. In early 1945 when her father enlisted and was training in the Army, she and her family moved back to Winlock near her maternal grandparents. In 1948 a couple years after her father returned from war in the South Pacific, the family moved to Independence, OR to work in the hop fields. While looking for a Taxi after shopping with her parents she met a young man, and after he finally managed to convince her that his family really did run a Taxi Service, he, Earl Thaine Bullock drove Jean and her family home. That night was the beginning of a lifelong romance. Jean completed her senior year at Independence High School and lived with Thaine’s family while attending Oregon College of Education in Monmouth. On 19 June, 1949 Barbara Jean and Earl Thaine were married in the Methodist Church in Independence. She was proud of the fact that 4 of her Great Aunts attended her wedding. Settling into married life, Jean and her now growing family moved from Dallas to Corvallis, where she and Thaine eventually established their current home south of town and where they raised their 5 Children and became part of the local community. She was fond of all animals raising chickens, rabbits, dogs, even a sheep or two and later in life a clowder of cats being affectionately known as the “Cat Lady”. She was a hard worker, along with raising her family, she helped raise her siblings, picked hops, worked as a row boss harvesting beans, picked filberts, pumped gas and tended the till at Greenberry Store, and eventually worked for the Oregon State University Bookstore stocking, then managing their Off Campus bookstore and eventually retiring from the OSU Bookstore Warehouse in North Corvallis. In her spare time, Barbara was a member of “The Mother Singers” a local choir group during the 1960’s, taught Sunday school when her children were young, was a Cub Scout Leader, a long time bowler; traveling throughout the country with Thaine or her sisters competing in tournaments and was an avid golfer. She was very involved in the Methodist Church in Monroe, helping organize various fund raisers such as the annual Mother’s Tea through the Crafty Ladies at her church. Barbara loved gardening, crocheting hangers (which she gave to anyone she felt needed a thank you) washcloths and caps for the preemie units at the local hospitals and hand sewed quilt blocks and pillows. Having the importance of family instilled early in her life, it’s not surprising she became an amateur genealogist. She and Thaine travelled throughout Oregon (and other states) walking through cemeteries in search of ancestors, and on Memorial Day weekend every year, they would place flowers on as many ancestral graves as they could (usually 3-5 cemeteries between Corvallis and Salem). If accompanied by family, Barbara would tell stories of her great-great grandparents coming to Oregon, one family by way of the Oregon Trail, another by way of the Isthmus of Panama. This trek was affectionately known as the “Grave Hop”, and as Matriarch of the family, she oversaw the Annual Anderson/Russell Family Reunion which will celebrate 75 years in August. The last few years Barbara was dealing with the physical and mental effects of a stroke. She fought a brave battle but finally succumbed to the complications and quietly fell asleep for the last time. Barbara was preceded in death by her son Bill Bullock; her bothers Bill, Pat and Jim Anderson and Sisters Dottie Nelson and Mary Lou Keeler. She is survived by her Husband Thaine; sisters Joan Beckner, Rose Schlewitz and Brother Ken Anderson; Sons Dennis (Pat), Jeff (Mary) and John Bullock; Daughter Beth (Gary) Pettit; 20 grandchildren, 54 great-grandchildren and 17 great-great-grandchildren. Barbara’s last resting place with be at Hilltop Cemetery, Independence Oregon. A celebration of her life for family and friends will take place in the next few months. Farnstrom Mortuary is caring for the family.

Barbara Jean Anderson Bullock, at the age of 91, passed away peacefully Friday, May 20, 2022, surrounded by her beloved family. Barbara was born on the 4th of July 1930 in Portland, Oregon. She was the oldest of 9 children born to William Clarke... View Obituary & Service Information

The family of Barbara Jean Bullock created this Life Tributes page to make it easy to share your memories.

Barbara Jean Anderson Bullock, at the age of 91, passed away...

Send flowers to the Bullock family.